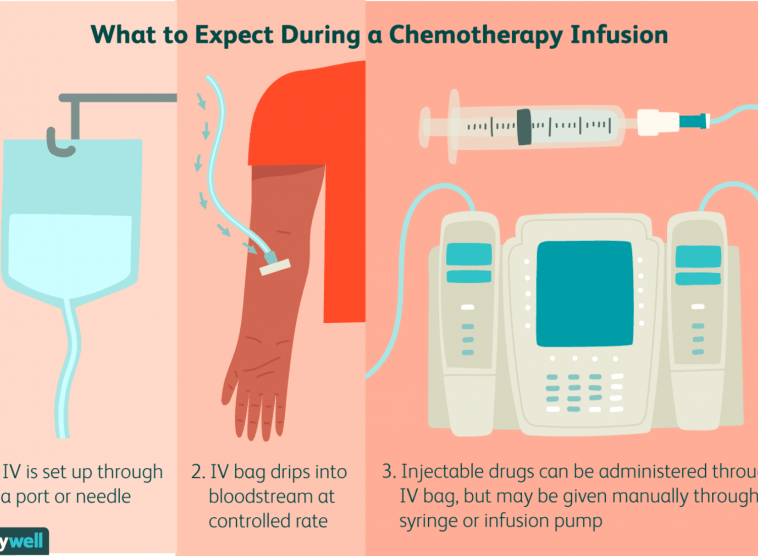 Table of Contents show
1 What is Cancer?
2 What is Chemotherapy?
3 How Chemotherapy works?
4 How Chemotherapy is Given?
4.1 Orally:
4.2 Injection:
5 Side Effects of Chemotherapy
6 These are the following side effects:
6.1 1.Nausea and Vomiting
6.2 2. Alopecia or Hair loss
6.3 3.Fatigue
6.4 4. Hearing impairment
6.5 5. Low WBC counts and Susceptible to infections

In a simple language, Cancer is the abnormal growth of cells anywhere in the body. Anything which converts normal body cells to develop into cancerous body cells may be ionizing radiation, pathogens, human genetics, etc.
Cancer staging is determined by Biopsy tests and also it helps to detect the cancer type and the extent of cancer spread.
Treatment protocols are different and it depends on the type and stage of cancer. However, most treatments include Surgery, radiation, and chemotherapy.
In this article, we will discuss the basics of chemotherapy treatment in cancer.

Chemotherapy is a widely used treatment for Cancer. As a part of Body’s natural process, cells are replaced by constantly dividing and growing process. In a Cancer, Cells are produced in an uncontrollable manner.

Chemotherapy interferes with the cancerous cell ability to grow and reproduce. It prevents progression of Disease and brings about remission by killing the cells as they divide.

Surgery and radiation therapy remove and kill cancerous cells but chemotherapy works throughout the body. This means that chemo can kill cancerous cells that have spread to parts of the body far away from the original tumor.
The effectiveness depends on the stage of the cancer being treated.

Chemotherapeutic drugs circulate throughout your body in the bloodstream. So it can kill cancerous cells anywhere in the body.

Body tissues are made up of billions of cells. Once they are fully grown, they don’t divide too much and they divide only when they need to repair the damage. In cancer, the cells divide in an uncontrollable manner until they make the mass of cells and that mass of cells is called the Tumour.

How Chemotherapy is Given?

Depending on the type of Cancer, Chemotherapy is given orally or as an Intravenous therapy.

This oral chemotherapeutic drug is available in capsules or liquid form. Depending on the patient’s health, tablets can be taken at home. However, the patient may have to regular hospital visits check their health and response to treatment. The patient has to take the exact dose in a specified form. If the patient forgets to take medications on a specified time then he/she should immediately consult a doctor.

This is called injectable chemotherapy. The drug is given directly into the vein through intravenous route via needle and IV infusion.

The drug can also be given

As an injection into a muscle in the arm, thigh or elsewhere.

Intrathecally injected into space between layers of tissue that cover the brain and spinal cord.

The drug may be given through a drip or pushed through a pump to ensure a constant rate of delivery.

Side Effects of Chemotherapy

Chemotherapy has many side effects but recent advances in the scientific area made it more manageable. These adverse effects mild to severe and also some people will have no adverse effects.

These are the following side effects:

This is the very common symptom and affects 70 percent of the people. The antiemetic drug helps in this condition along with ginger supplements.

Hair may start to fall or become thin after getting treatment. Also, it can affect any part of the body. Hair loss does not cause any other health problem but it makes the patient depressed or distressed. So a doctor may put the patient with a counselor about obtaining a wig or covering cap. Using a cold cap helps in reducing hair loss.

This is the common side effect. The patient should get enough rest and avoid to do overtiring work. Severe tiredness is the reason for dropping blood cells and which leads to anaemia.

During chemotherapy treatment, the immune system gets weekend because  WBC counts go down and also that leads to infection.

The patient should take antibiotics to avoid infection and also follow some precautions.

Other side effects are Anemia, Mucositis, Loss of appetite, Bowel problems and mental health problems.

In the end, chemotherapy supersedes the side effects which it causes during the treatment.